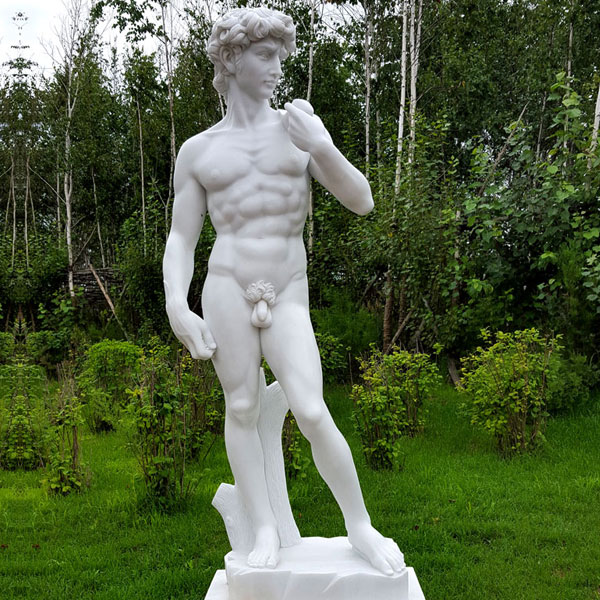 David was the masterpiece of the Renaissance sculpture created by Michelangelo from 1501 to 1504 in marble. David is a male nude nude statue of 5.17 m (17.0 ft) tall. This statue represents the hero of the Bible, David, a popular theme in the art of Florence.
Item No: TMC-05
MOQ:1 Piece
Material:White Marble
Type:Famous sculpture around the world
Technical:Hand carved
Surface Treatment:High Polished

His amazing Renaissance sculpture was created between 1501 and 1504. This is a 14.0-foot marble statue depicting the biblical hero David, representing a standing male nude. Originally commissioned from the Opera House of Florence Cathedral, it is a series of large garden marble statues, placed in the niche of the cathedral’s grandstand, about 80mt from the ground. Michelangelo was asked by the commission’s consul to complete an unfinished project david that began in 1464 by Sant’Agostino di Ducho and was later conducted by Antonio Rossellino in 1475. Both sculptors eventually rejected a huge piece of marble because there were too many “taroli” or beaks, which could threaten the stability of such a giant statue. The special size of this piece of marble was therefore still overlooked for 25 years and lay in the yard of the opera del cathedral (parish board). David was originally appointed as one of a series of prophetic statues on the roof of the eastern end of the Florence Cathedral, but was placed on the public square outside the palace of Wedge in Florence’s civic government, unveiled on September 8, 1504 at Piazza della Signoria Square.

Because of the nature of the hero it represents, the statue soon symbolizes the symbol of civil liberties embodied in the Republic of Florence, an independent city-state, threatened by the hegemony of a more powerful hostile state and the American family. David’s eyes, with a watchful glare, turned to Rome. The statue was moved to the Galleria Dell ‘ Accademia in Florence in 1873, and later replaced by replicas in its original position.